Not all One Way Traffic!

The last month has been busy with stock departing.

The five 317s departed to Ilford in the last week of February and, hopefully, a return to service.

The enlarged Tube Lines Asset Inspection Train departed over three days at the beginning of March. The two additional cars now painted to match the rest. A lot of the overhaul and conversion work has been done but further work is to be done in London.

The NR Swich and Crossing carriers departed behind 66155 on 24th February.

The DRS Escort Coaches departed on 4th March after overhaul.

The Swanage Railway class 108 DMU has arrived by rail for repairs, coming in behind 33207 on 6th March.

Wagon exams and general repairs continue to increase with two trips in from Maritime this week.

The two 508s being converted into Translators are progressing well with both now painted and looking very smart, even if they do look a bit strange with buffers on one end and only one window on the other!

The LU Inspection Saloon is back on its bogies.

So, plenty going on, even if the yard does look a bit empty....although, if you look closely, the yard is quite full of flat wagons!

A rake of NR point carrier wagons arrived late last week for maintenance. Not often you get the opportunity to see these horizontal as they travel the rails slanted at an angle.

The 32 coil carriers have now all gone, the last one dispatched by Raxstar on Monday this week. RIP

Scrapping of C Stock will resume next week. There are currently 15 awaiting scrapping, two in our shed being processed and five waiting their turn. We have another six vehicles due in over the next month.

Wabtec are working on 455815 which is due out Friday 21st. Its replacement should be in by Monday 24th.

There's the distinctive throbbing hum from a pair of EDs alongside the Van Shop, it's more of a feeling than a sound! 73119 and 73109 are formed up with GLV 68505 making ready to leave shortly. Also on site are 73208 and 73213 which arrived as a foursome yesterday with the other two but are now sat on the short road alongside the Fareham line awaiting their next duty.

Raxstar have scrapped four more coil carriers this week. There are still some more to do before they resume scrapping C Stock. There are currently seven C Stock in the yard awaiting the chop. Work continues on processing the rest of the C Stock with 5601 currently over the pit.

Work is underway in the old Cleaning House which Arlington are turning into a diesel loco servicing shed. A new pit is being built and the track was surveyed yesterday to see what work needs to be done to bring it up to scratch and extend into the shed. 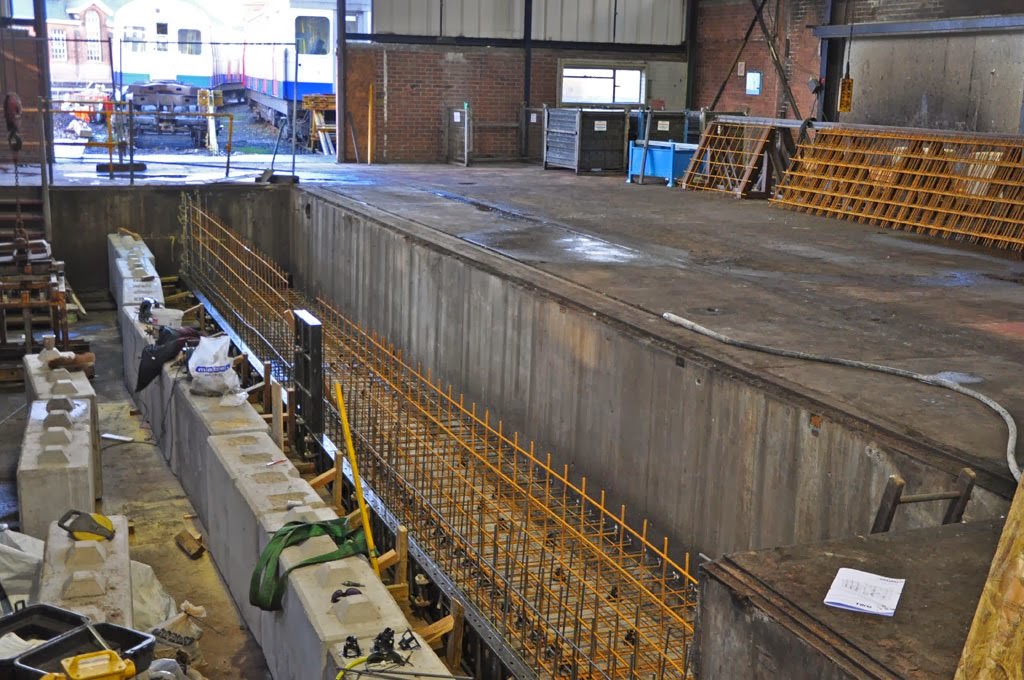 Earlier this week the yard boys broke their record again when they dispatched 24 wagons on the trip to Maritime.
Posted by Carl Watson at 09:25 1 comment:

Bit of an ED fest today with five in the yard and one in the shed!

There are 20 completed wagons to go out but the trip isn't running today after all so these will have to wait for another day.

Scrapping of C Stock has halted temporarily while Raxstar concentrate on scrapping some coil carrier wagons with three dealt with so far this week.
Posted by Carl Watson at 15:34 No comments:

How did I miss that?

Firstly, Happy New Year to all of you who spend a few minutes now and again reading this blog.

This morning, an almost completed 66712 was shunted out of the Arlington Paintshop! I missed this one arriving, apparently over Christmas sometime, and didn't realise it was here. Woops! Shows how busy we've been.

Underground deliveries have stopped for now and Raxstar are crunching their way through the vehicles in the scrap line, only 5 left this afternoon. We still have 16 vehicles to process, including two that are currently inside our shed, so plenty to do.

The two additional AIT cars were shunted into the Paintshop this morning. The rest of the AIT cars are being moved from Bay 1 South into one of the Test Sheds which has been kitted out so they can be worked on to get the six vehicles put together.

Kof 539-7 emerged from the Paintshop before Christmas painted in Arlington green, to match the Ruston, and wearing the name 'Cheviot'. 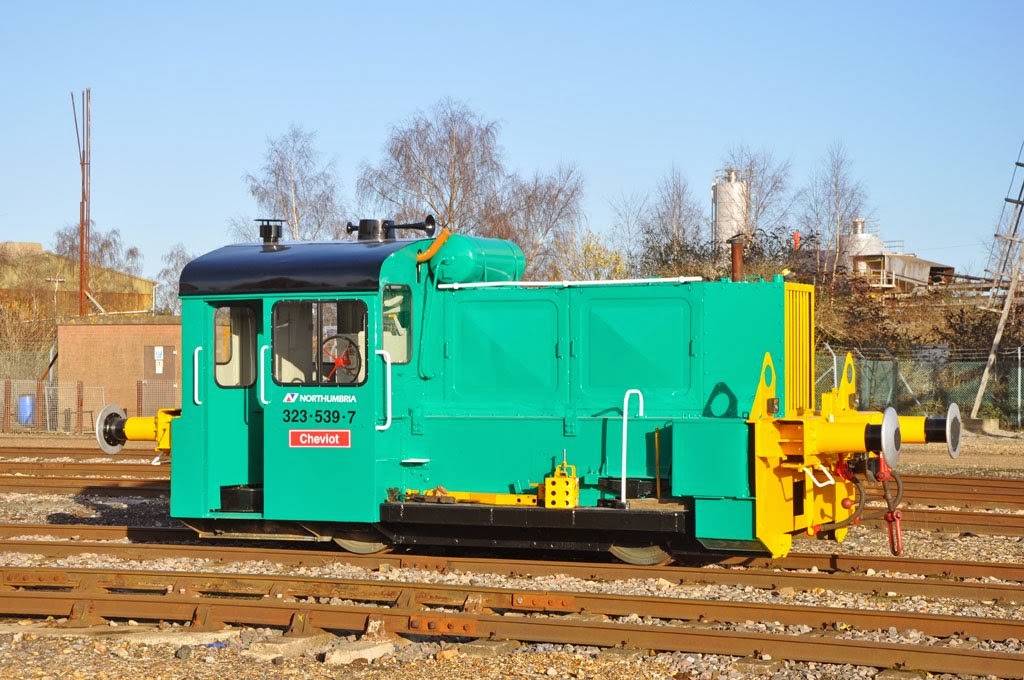